Code Red is the Emergency Communications Network that the City of North Wildwood uses to notify the residents of emergencies that are taking place in North Wildwood.    It is used most frequently for flooding from rain and tidal flooding.  In 2018 it was used 27 times for tidal flooding and 28 times for flooding from rain with an additional five storm specific messages.    The system is geographic based in that you will receive messages based on your address.   For example those people living on the East side of town probably only receive one or two messages a year while those on the West side of town, that is prone to flooding, will receive the most messages.    The Code Red ECN is a web based system that utilizes messages created by the Office of Emergency Management.   The Police and Fire Departments also have the ability to create and send messages.   Most messages are sent by the Police Dispatch at the request of Emergency Management or the Police Shift supervisor.    During emergencies the messages have to be put out quickly and to have consistency in wording the messages that you receive are pre-made as a Scenario, which is simply a message connected to a geographic audience.    Currently there are six pre-made Scenarios (1) Initial Street flooding from Rain, (2) Street Flooding from Rain with flood siren sounded, (3) Initial tidal flooding, (4) tidal flooding with flood siren sounded (5) Tornado Siren Sounded, and (5) Snow Emergency route notice.    Later we will explain more about these scenarios.    Other uses for Code Red are for emergency warnings from Police and Fire.   For example if there was a chemical or natural gas leak the fire department could notify all residents within, say 500 feet of the leak, to shelter in place and close all windows.   If there was hostage or active shooter situation the police department could notify all the properties within, say 1000 feet of the incident to lock their doors and stay away from windows.   Other uses could be evacuation notice, shelter openings, when to listen to 1640 AM for a longer message, where to get assistance, alternative phone numbers to call when the main number is down, etc.   The Code Red ECN can send messages via several different platforms – the first is voice message as a phone call,  the second is TDD (Telecommunications Device for the Deaf), E-mail,  Code Red Mobile App, Text and Facebook.    All messages will be the same except Text which has to be reduced to 160 characters.

How do you sign up – All Verizon (hard line) and Comcast (hard line) phones are in the system and are updated on a regular basis automatically (usually monthly).   You have the option to logon on to the Code Red ECN website and add your email address, other phone numbers (cell phone,  other family members, out of town phone) and you have the option to sign up for text messages, TDD messages and severe weather warnings.  Severe Weather Warnings is an additional service from Code Red ECN that the City of North Wildwood pays for and sends National Weather Service severe weather warnings via the Code Red ECN system.   Currently they offer Tornado, Severe Thunderstorm and Flash Flood Warnings only.    This is a free opt in service that you have to sign up for online.    To visit the North Wildwood Code Red signup site go to http://ready.northwildwood.com and the Code Red link is on the left hand side at the top of the link list.     We urge you to create a password when you log in so that you can go back and add or delete numbers and email addresses.   If you forgot if you signed up or not – simply do it again as the Code Red system will cull out duplicates and only send one message for each different number.   When you move out of the area but keep your home phone number the change will be caught in the next Comcast / Verizon update.   However if you signed up  your cell phones and email addresses you have to go in and delete them.   If you did not create an account so you can go back and delete your number we have the ability to block calls to a number and ask you to call the emergency management number and leave a message with name and voice number or text number or email address you want off the list.   Occasionally we have people that don’t want flood messages – we no ability to tell the system what messages go to what number – it is either all or none.   In fact we have no ability to see what numbers are in the system.  We ask those people that want their number to be blocked to reconsider as you may miss an important emergency call.

Now more about the pre-made scenarios – 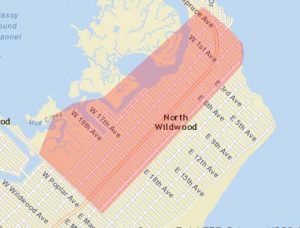 The tornado warning message goes to the entire city

The snow emergency route message only goes to those people on New Jersey and Atlantic Avenues. 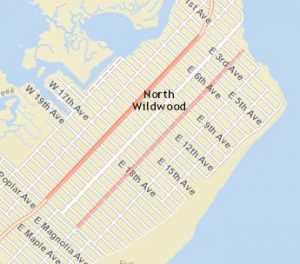 Lastly, the Cape May County Office of Emergency Management also has a contract with Code Red ECN to deliver emergency messages to residents of the County.   The same Code Red ECN database that we use and you added your additional numbers to is used for their messages.    This will be utilized during major events that are affecting multiple municipalities.

To receive notification of an emergency when they happen click here: Code Red ECS  follow instructions to add your email address